Uranium Glass: a bit of history and a bit of science

Uranium Glass: a bit of history and a bit of science

We suggest you read all the information here before purchasing any of our Uranium Glass items.
We are more than happy to answer any other questions you may have before you purchase - please use the Contact Us form on our website.

The invention of Uranium glass is generally credited to Josef Reidel in 1830s Bohemia; he named the two types he produced Annagrun for the yellow-green glass and Annagelb for the yellow glass. However, yellow glass containing Uranium oxide was discovered in a mosaic in Italy which was dated to around 79 AD - so it looks like the idea wasn’t so ‘new’ after all!

Uranium glass is often called canary glass, custard glass, Vaseline glass or Depression glass. It has been used for all sorts of items; jewellery, tableware, lamps and vases and was very popular in 1920s and 1930s ‘Art Deco’ style glassware objects.

By the 1940s Uranium glass production had spread to Western Europe including France and England; it was also being produced in Japan and the USA. Between 1943 and 1958 American and UK governments did ban the use of uranium salts for commercial use as they wanted Uranium restricted to military use; so most Uranium glass produced after the early 1940s contains depleted Uranium. 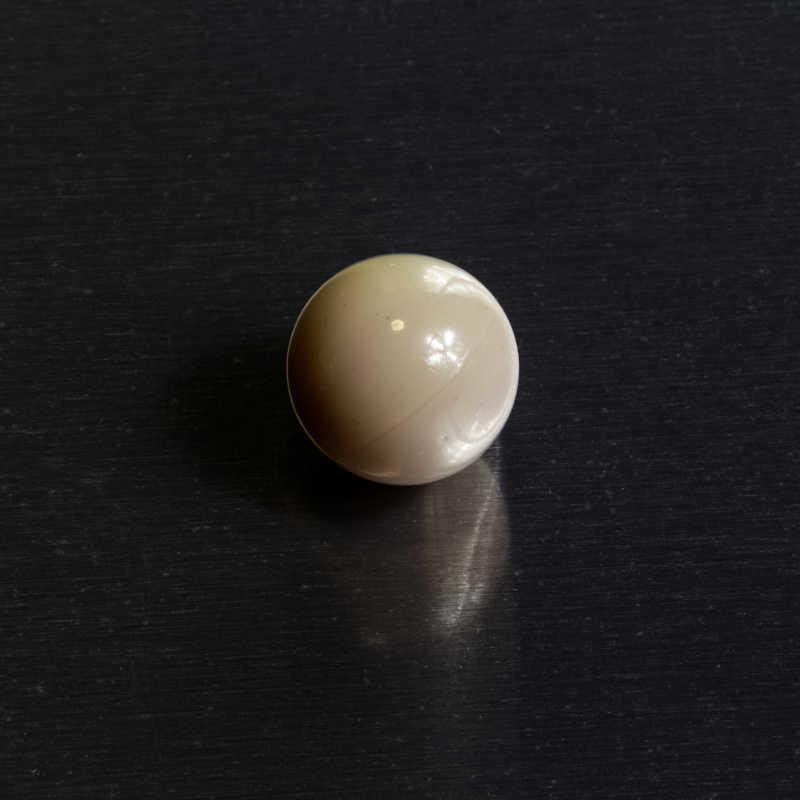 As seen in daylight 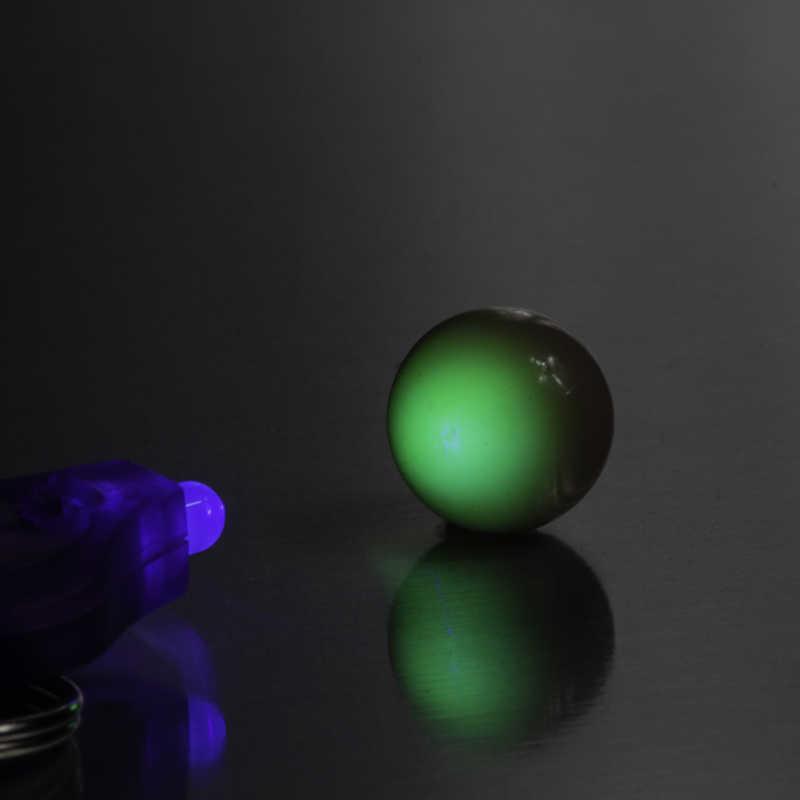 As seen under UV light 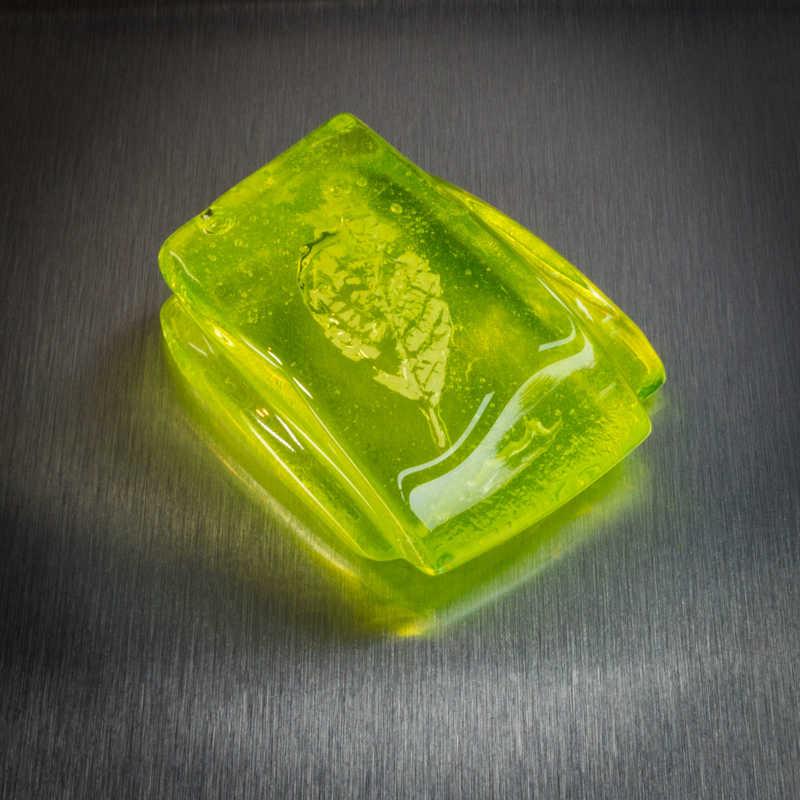 Shown in daylight.
This beautiful ornament or paperweight was made by us at COOL Science 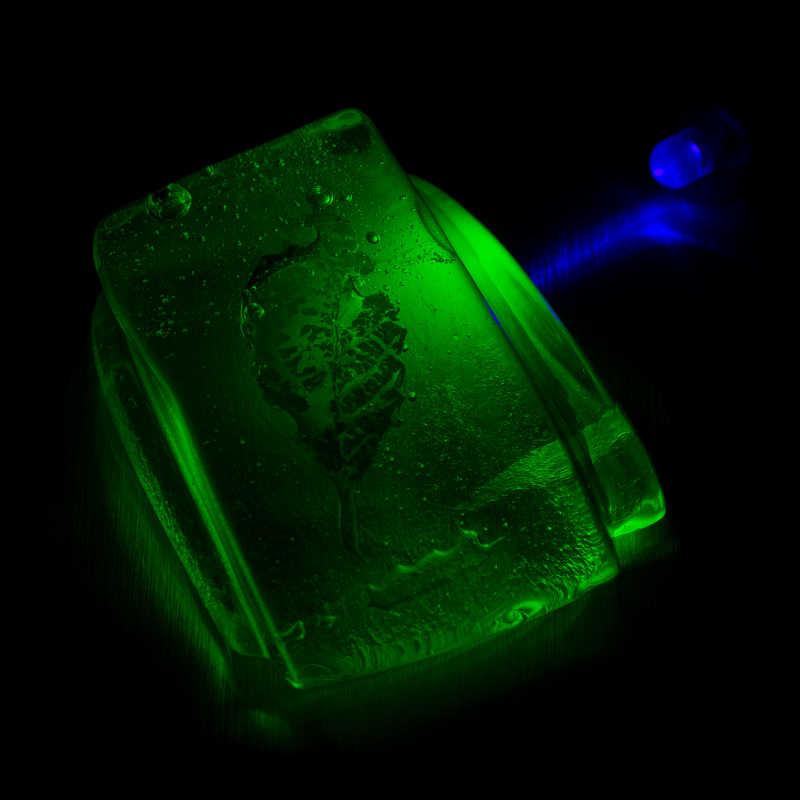 As seen under UV light.

Uranium glass is made according to many various recipes using different oxides or salts of Uranium depending on the colour required. It fluoresces with an eerie yellow green glow under UV light – but it doesn’t ‘glow in the dark’ by itself! How bright the glass glows depends on the amount of Uranium dissolved in the glass and also which other substances that may have been added to the glass to determine colour and opacity.

So, what can you do with it?

As part of an element collection:

If you have just started a periodic table of elements collection, or you are already building a collection and are looking to represent Uranium, this is an ideal and safe way to do just that. Uranium glass is perfectly legal to own and sell in the UK.

Uranium glass has another advantage - because the Uranium dissolved in the glass is in the form of what is called the Uranyl ion (oxidation state 6), the glass exhibits a beautiful yellow green fluorescence under ultra violet light, (i.e. sunlight). This yellow green fluorescence is a good indicator that glass may contain Uranium, though not proof - just because a glass sample reacts to UV light does not mean it contains Uranium.

As a Geiger counter check source:

May be! depending on the type of detector you are using, if you have a sufficiently sensitive device you may be able to detect emissions coming from Uranium glass.

So, with the proper instrument you will be able to detect alpha, beta and gamma emissions from the sample but as stated above it does need to be a sufficiently sensitive instrument; and to detect alpha particles the instrument must also have an alpha window.

Although Uranium and a lot of its progeny are alpha emitters, all but the alpha emissions coming from the very surface of Uranium glass are blocked as alpha particles have very poor penetrating power even though they carry a lot of kinetic energy. Beta particles coming from Uranium decay products are detectable and although they have more penetrating power than the alpha particles they are greatly attenuated by the glass. Uranium glass does not emit a great deal of Gamma.

Any redistribution or reproduction of part or all of the contents in any form is prohibited other than the following:

Whilst we endeavour to ensure that any references to external websites are accurate and relevant to the subject discussed in these pages, they are only provided for the purpose of further information the reader may wish to explore.
Their presence is not meant to imply that COOL Science endorses or guarantees either the information found therein, or the organisations, companies or persons who own those websites.
We can take no responsibility for the maintenance or contents of external websites.

All information contained within these pages may be subject to change without notice.