Radium: a bit of history and a bit of science

Radium: a bit of history and a bit of science

How was Radium discovered?

Most people know Radium was discovered by Marie Curie but how and why did the search begin?

X-rays – that was the start of it all; discovered by Professor Wilhelm Conrad Röntgen in 1895 when experimenting with passing high-voltage electricity through a vacuum tube he noticed that the rays given off made a chemical-coated paper glow. Röntgen found that when these rays passed through a hand (his wife’s) they left an image of the bones on photographic plate.

Henri Becquerel was at the 1896 Paris reading of Röntgen’s scientific papers and was very interested in his discovery, especially in the reasoning that the X-rays originated when the glass of the vacuum tube was made to fluoresce by the bombardment of electrons. Becquerel determined to discover whether any of the known fluorescent compounds would emit similar rays when subjected to an energy source (he used natural UV light).

Using photographic plates to detect any rays given off, he had little success until he tried a fluorescent compound containing Uranium called potassium uranyl sulphate. Excited by this success Becquerel published a paper – however, he continued to experiment and soon realised that he had been wrong - it didn’t matter whether the compound was fluorescent or not, as long as it contained Uranium it would still produce the rays – it didn’t even need an external energy source to do so! He therefore deduced that the rays must be coming from the Uranium itself.

In the eyes of the scientific community these rays of Becquerel’s were no match for Röntgen’s more penetrating X-rays and were pretty much ignored. Until, that is, the subject caught the attention of a young woman looking for a research topic for her doctor’s degree – that woman was Marie Curie.

Marie Curie studied the Uranium rays from another perspective discovered by Becquerel – which was that the rays had the effect of turning the air they passed through into an electrical conductor. To do this she used a sensitive Piezoelectric Quartz Electrometer that had been invented by her husband Pierre and his brother Jacques to measure minute amounts of electrical current.

Marie’s ideas attracted husband Pierre and the two worked together on the project. One of the first observations they made was that the ores of Uranium they studied often produced much stronger rays than Uranium alone. The Curies concluded that these ores, of which pitchblende was one, must contain other ray-giving substances and they were not present in the Periodic Table.

Could it be a new element?

The term radioactivity was coined by the Curies as they experimented with ways to separate the various elements of pitchblende and their first success came with a new radioactive element that sorted out with Bismuth. They named this element Polonium in honour of Marie’s birth country Poland; but there was another, much more radioactive substance which sorted out with Barium that proved very difficult to isolate.

So the Curie’s turned to Eugène Demarçay, who was a French chemist skilled in spectroscopy; he analysed the spectrum of their samples and agreed there was a new element present. Marie and Pierre named this element Radium because of the intense rays it emitted and announced their discovery to the world in late 1898.

It took another 4 years of hard slog processing tons and tons of pitchblende and slag from various mines before the Curies finally managed to isolate one-tenth of a gram of pure Radium Chloride and determine the atomic weight of Radium to be 225. Marie described the Radium Chloride sample as having a bright blue "fairy-like glow" – it must have been a wonderful sight to them!

After the unfortunate death of Pierre Curie in a road accident in 1906 Marie continued to work with their chemist friend André Debierne, and in 1910 they managed to isolate Radium in its metallic form by the electrolysis of a solution of pure Radium Chloride.

What was this new ‘wonder metal’ used for?

Radium was used in some, what we would consider, alarming ways:

Some of these products only used the name Radium – they didn’t actually contain it - but some did!

By the 1930s, it had been found that exposure to Radium posed a serious hazard to health so other technologies and substances gradually began to be used in its place.

A major factor in this finding was the case of the Radium Girls, a group of American factory workers who challenged their employer in court after contracting radiation poisoning from painting watch dials with self-luminescent paint.

They had been assured the paint was harmless and were instructed by factory supervisors to lick their paintbrushes to give them a fine point; sadly as a result, the girls had ingested deadly amounts of Radium. 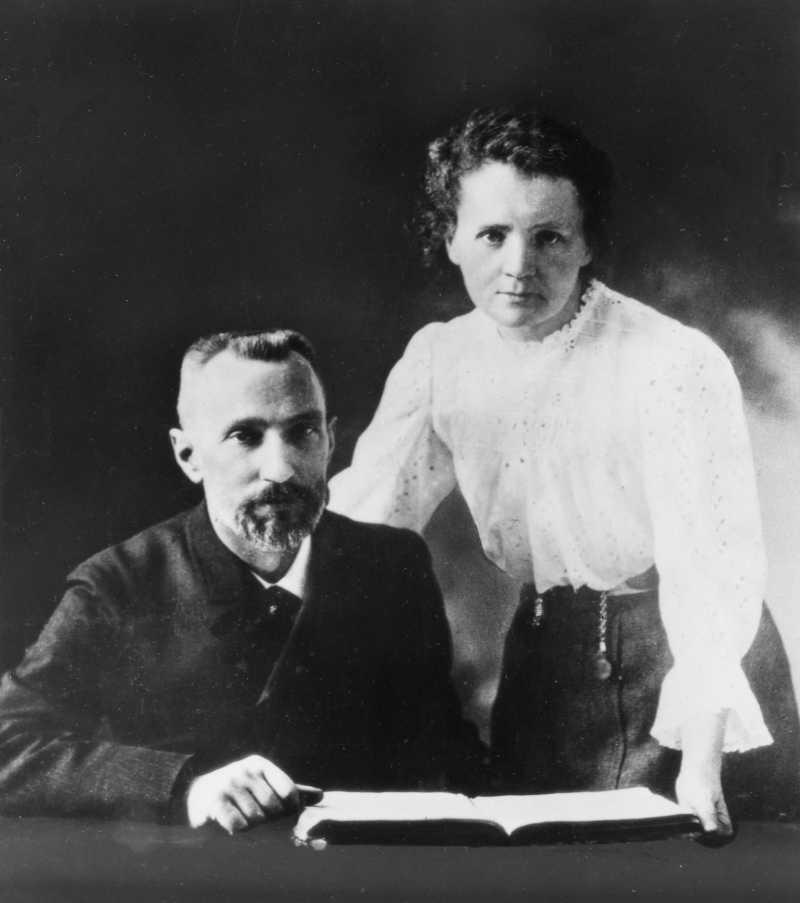 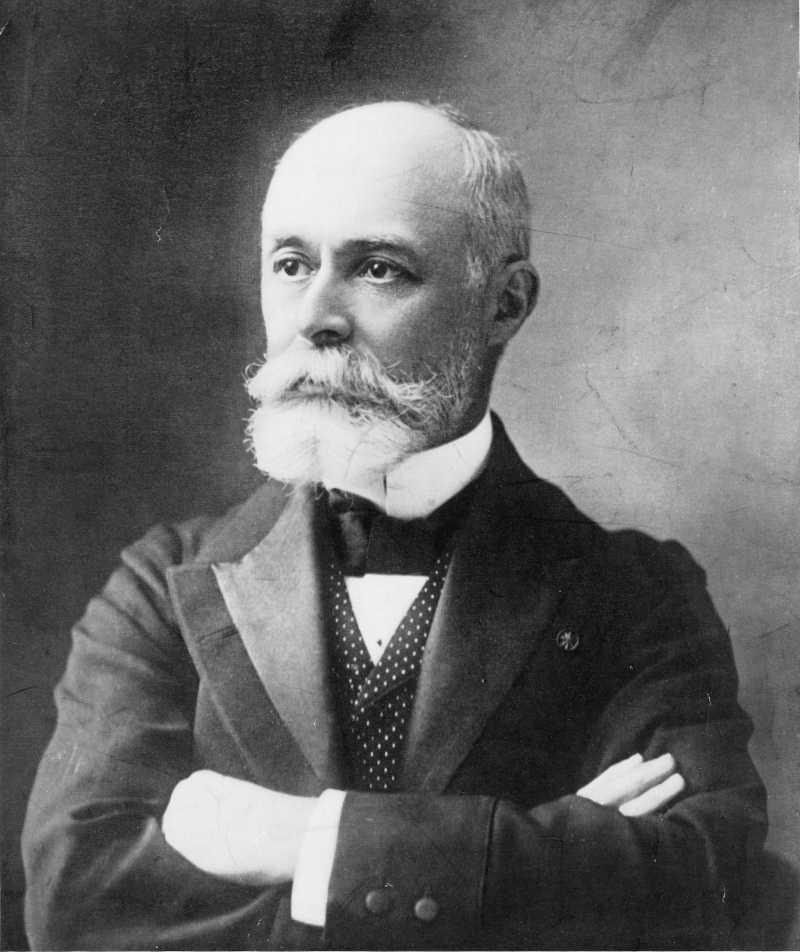 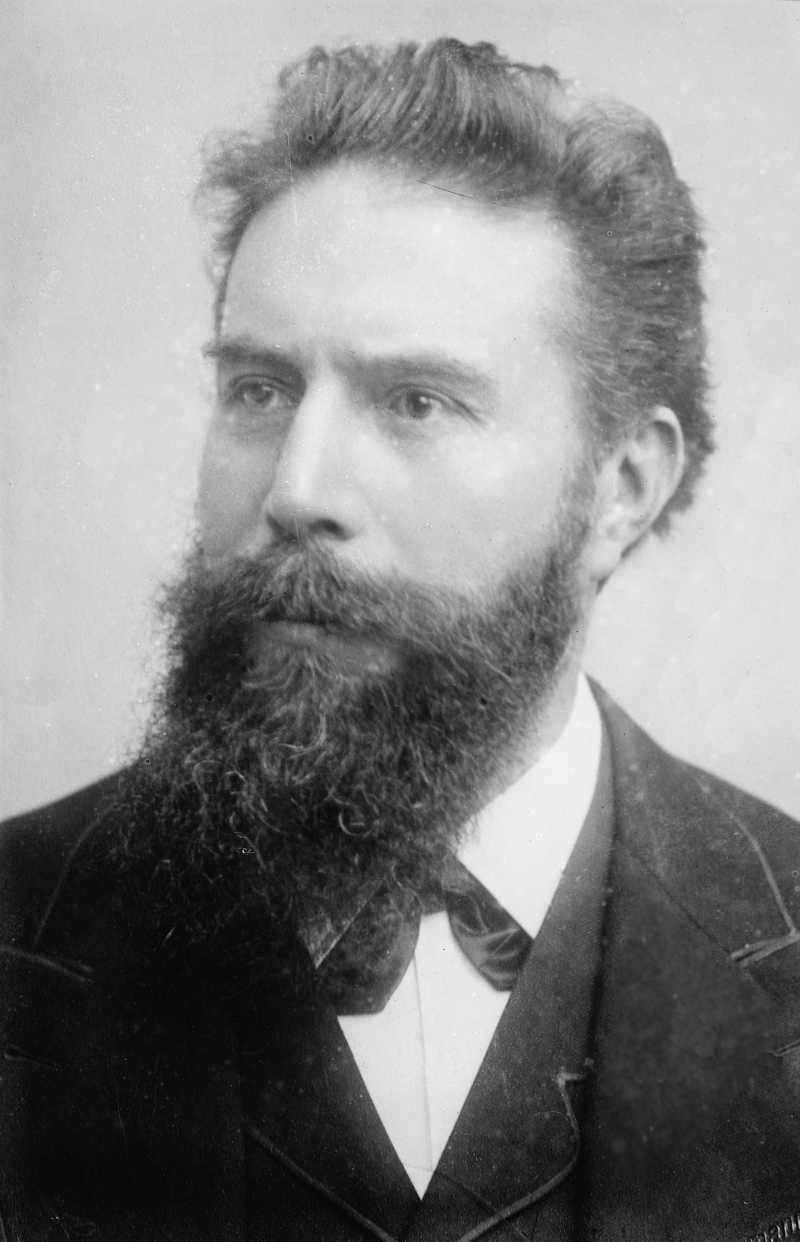 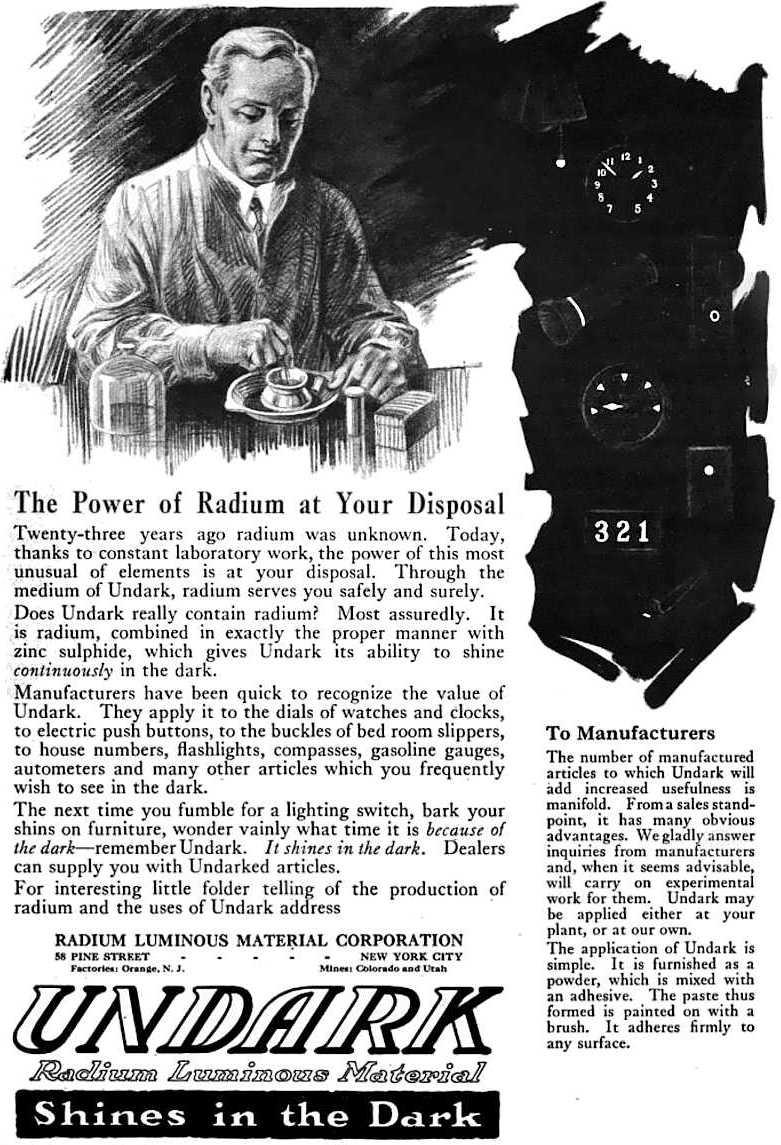 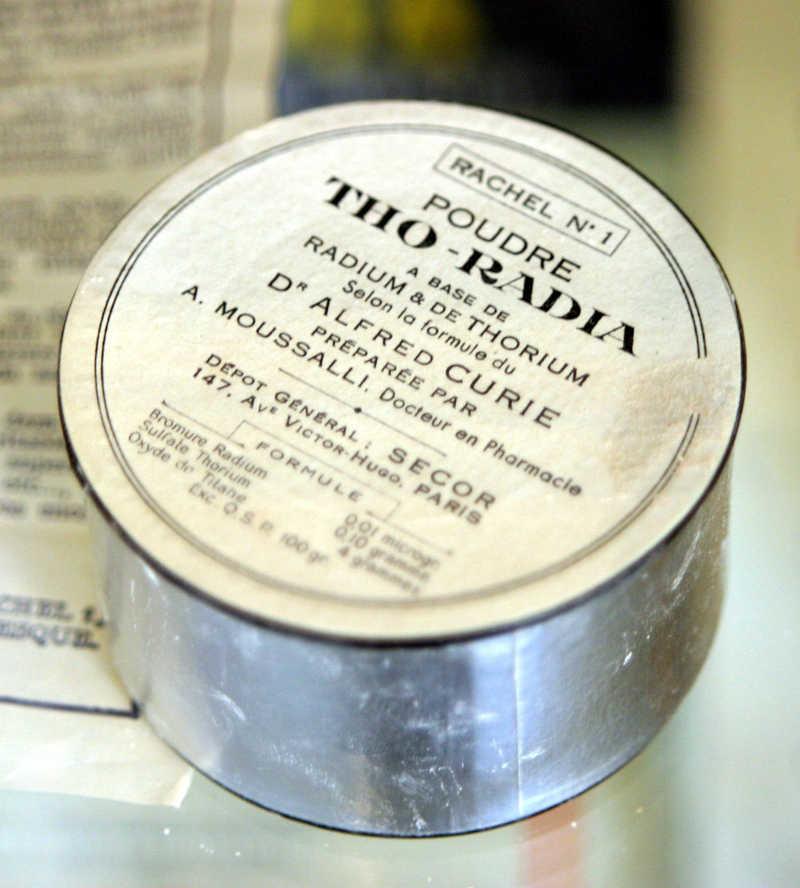 A box for a comestic powder based on Radium and Thorium produced c.1933

What do we know about Radium now?

Radium has a number of isotopes none of which are stable; the Radium isotopes originate from the radioactive decay of Uranium or Thorium, the most commonly known ones being:

Radium decays to form isotopes of the gas Radon which is radioactive but not chemically reactive.

The number of atoms in one gram of Radium-226 that will decay in one second is used as the basis of measurement for describing the activity of a radioactive substance. The unit of measurement is a curie (symbol Ci) named after Marie and Pierre Curie. The curie is defined as: 1 Ci = 3.7 × 1010 decays per second.

Although a non-SI (International System of Units) unit of radioactivity, the curie is still widely used in the field. The SI unit of radioactivity is the becquerel (symbol Bq) named after Henri Becquerel. One Bq is defined as the activity of a quantity of radioactive material in which one nucleus decays per second. The Bq unit is therefore equivalent to an inverse second, s−1.
Converting curie to becquerel gives: 1 Ci = 3.7×1010 Bq = 37 GBq (gigabecquerel)

OK, all this science is good - but does Radium really glow?

Marie Curie described her sample of Radium chloride as having a bright blue "fairy-like glow" - but this glow was in fact, not coming from the Radium itself.

Radium is highly radioactive; as it decays numerous alpha and beta particles are emitted, along with gamma rays. These particles ionise the material around them, and when some materials are ionised they emit a visible light glow. Such materials can be fluorescent (only emit light when initially excited) or phosphorescent (continue to emit light for a period of time after exciting).

Radiation particles also ionise air molecules, which are predominantly Nitrogen and Oxygen. Nitrogen de-excites by emission of a photon and it is this which is mainly responsible for the blue-glow around a Radium source in air. Oxygen de-excites mainly by reacting with other Oxygen molecules producing ozone, which is also commonly detected around strongly radioactive materials.

It turned out that Marie Curie’s sample also contained Radium bromide and Uranium chlorides which have slight fluorescent properties; so, when excited by the radioactive decay of the Radium contained within them, it was the compounds that glowed - not the Radium itself.

In the self-luminescent paint of the early 1900s, it was the mixture of Zinc sulphide and Copper which produced a bright green glow when bombarded by charged particles from the Radium added to it.

Why don’t Radium dials made with luminous paint glow anymore?

Old Radium dials may no longer glow - but they are still very radioactive. This is because the fluorescent compounds in the paint have been broken down by radiation from the Radium.

As the half-life of Radium is 1,600 years Radium dials made in the early 1900s will still be significantly radioactive. Radium and its fission decay products are alpha, beta and gamma emitters:

However, the danger in handling Radium dials is not so much in the radiation received from proximity, but from inhalation or ingestion of paint particles or contaminated dust. Another problem is the inhalation of radioactive Radon gas released as part of the decay process of Radium. The tissues of the lungs and other internal organs are far more delicate than skin and are therefore very susceptible to damage from alpha particles.

A lot of WWII luminous aircraft dials contain much more significant amounts of Radium as it was used in higher concentrations in the paint manufactured for them; thus having much higher quantities of Radon. Extreme caution should be taken when handling any such items.

This is a very abridged story of the discovery of Radium; the actual story is very involved and spanned many years. A lot of the well known scientists of the era were involved; a lot of the discoveries were made by accident, and a lot of the conclusions drawn in the long journey were wrong and revised numerous times. It’s a fascinating and interesting story rooted in science history and is well worth further study, which as always we highly recommend and encourage.

A really interesting read is a book which is now out of print but may be available at libraries:
The Restless Atom by Dr Alfred Romer (first published in Great Britain 1961)