What is computer programming?

A dictionary [merriam-webster.com] definition of programming:

Computers get instructions to do tasks from programs that are constructed in a programming language (the source code) and then converted to machine code. Those tasks could be to carry out mathematical computations, create a web page, create software such as writing, accounting, drawing applications and much more. The source code is considered human readable but has to be converted (by compilers, assemblers or interpreters depending on the programming language) into a form that is computer readable.

So, whilst it may seem that when we sit down to our computer it knows exactly what to do, for example:

There are many more ‘behind the scenes’ processes that computers carry out, they are all hidden from us and probably taken for granted most of the time. But we should remember that someone has actually written those sets of instructions (the programs) that ‘tell’ the computer how to do all of these things; and then take a moment to imagine and appreciate how many thousands upon thousands of lines of code they contain!

Simply put the “Hello World” program is a relatively basic program used to illustrate the syntax of a particular programming language; of course it ultimately displays the message “Hello World” which gives great joy to any new programmer!

Hello World is even used as a means of gauging the of ease-of-use of a programming language; the time it takes to write and execute a “Hello World” program in a given language is known as the TTHW or “Time to Hello World”

To write a program in C++ three things are needed: a compiler, a text editor and a command line terminal. If you're on a Linux Box (computer) writing a “Hello World” program in C++ can be a remarkably simple task as it usually has all of these installed and ready to go. If you're on a Windows computer the process is similar but you’ll probably need to install a suitable compiler – there’s plenty of information on how to do this on various websites.

So, here's a quick “Hello World” demonstration in C++ (we’re using a Linux box)
In a text editor (we use Kate) we typed the following: 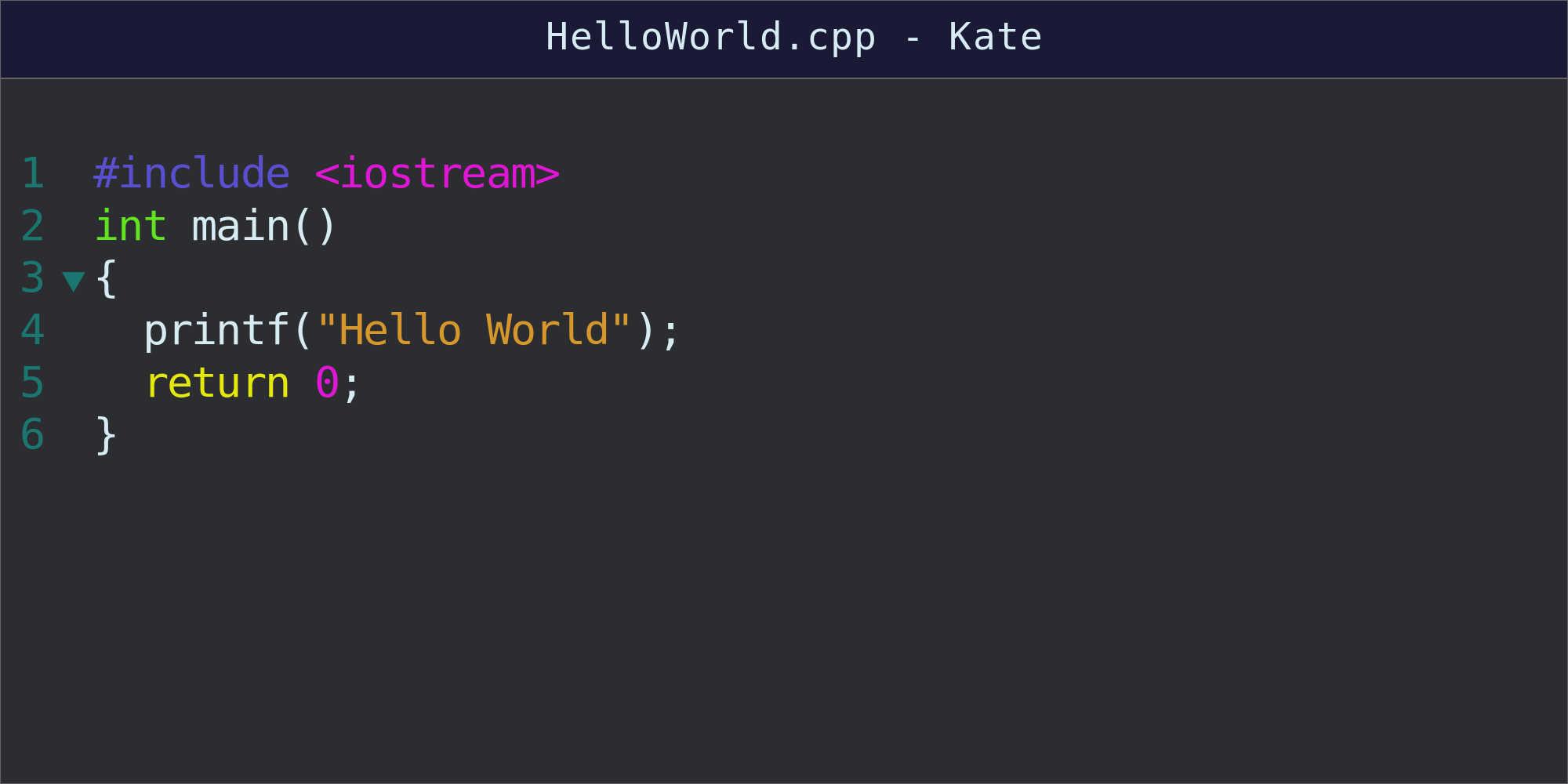 This file was saved as HelloWorld.cpp in a folder named HelloWorld; we then opened a command terminal from within that folder and typed the following commands (pressing Enter after each):
g++ HelloWorld.cpp -o test
./test 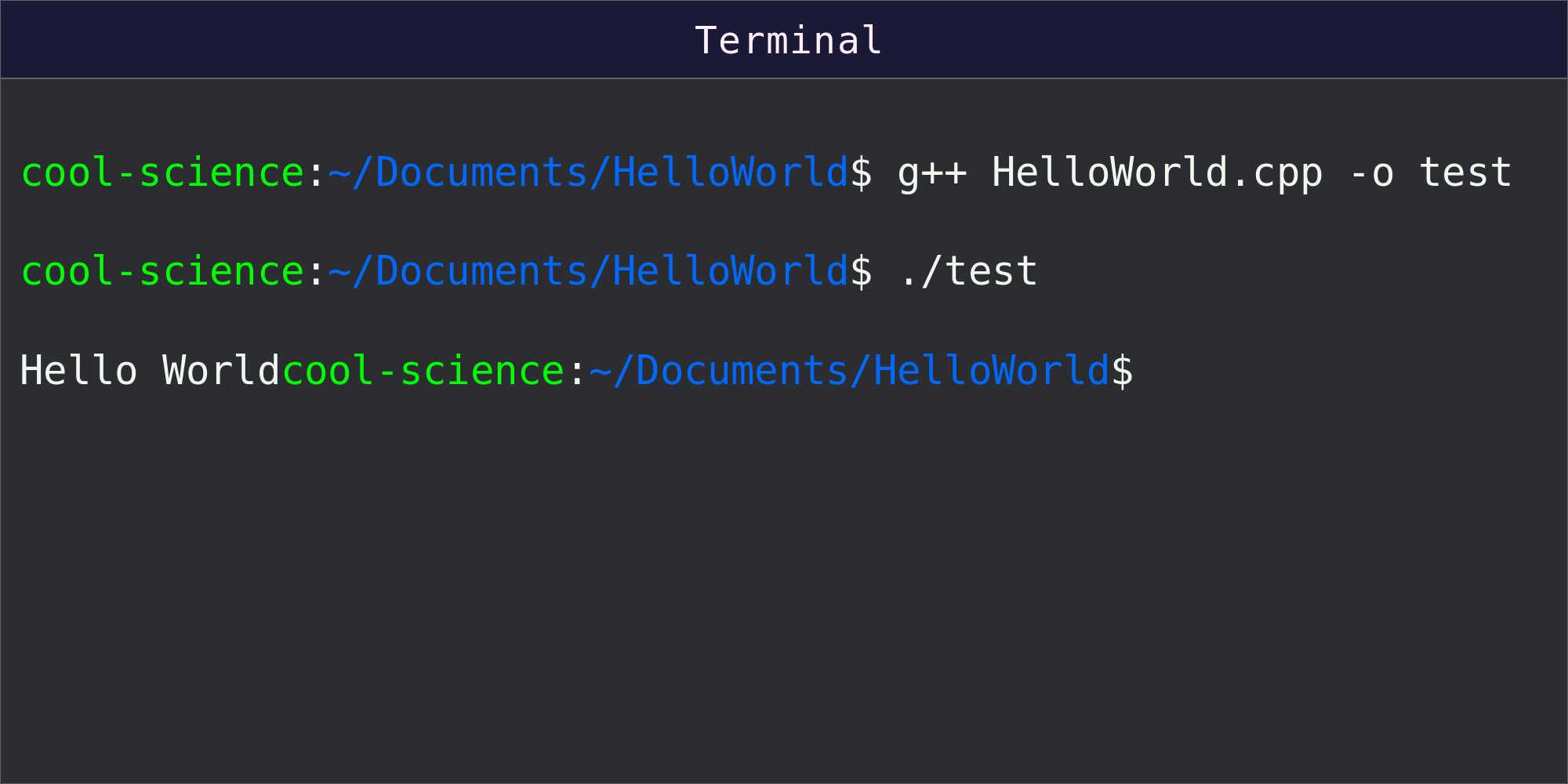 As stated before the code shows the basic structure of a program within a particular language, in this case C++, to explain briefly:

In the terminal, the command lines are:

Although this may not look all that impressive if it’s your first go at programming you've just written, compiled and ran a C++ program!

But the output is a bit untidy, our “Hello World” is at the beginning of the last line which is not ideal so to neaten things up a bit we changed the code in the HelloWorld.cpp file to: 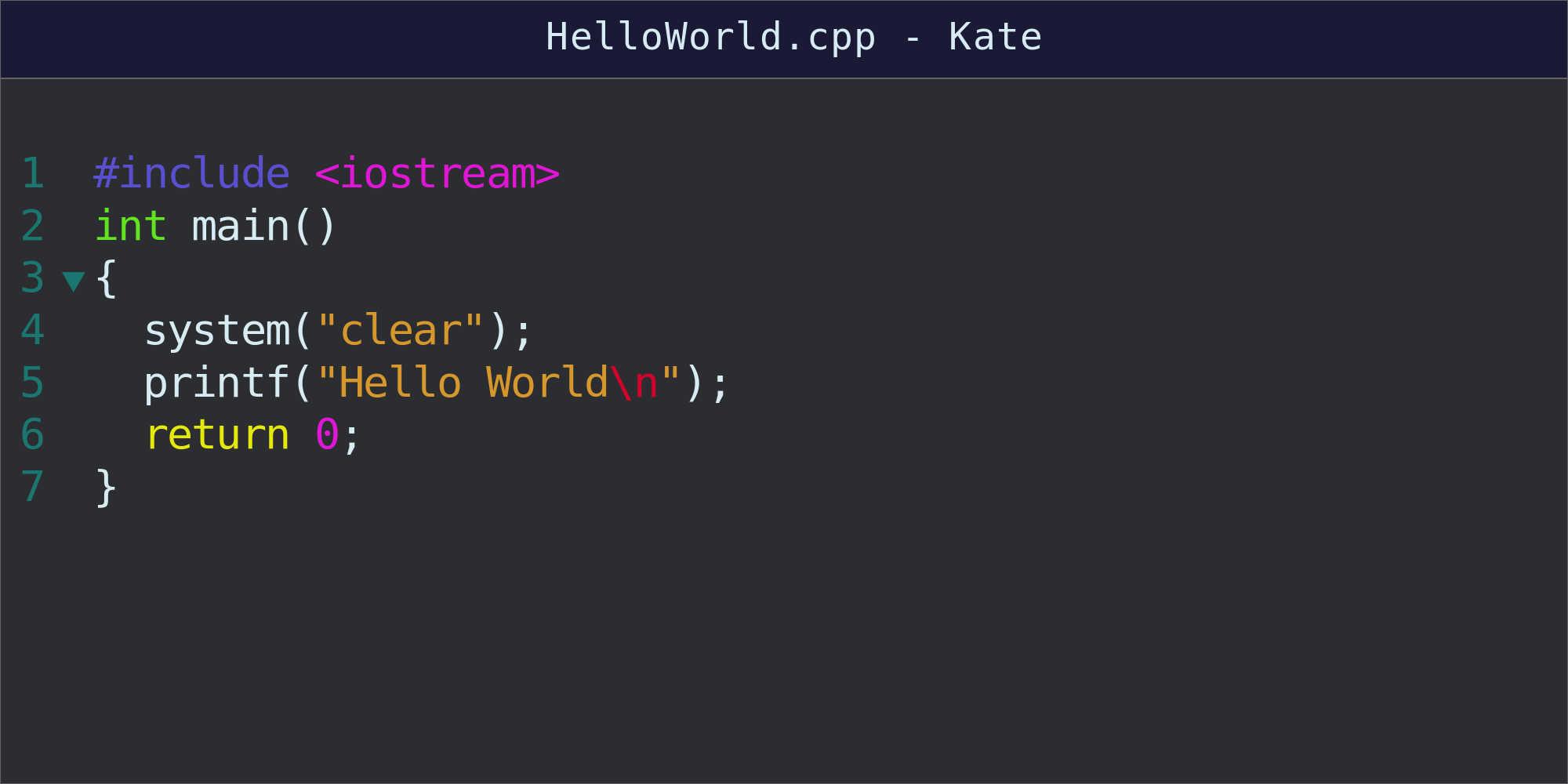 To explain the changes:

Then we ran the same terminal commands as before and the result was: 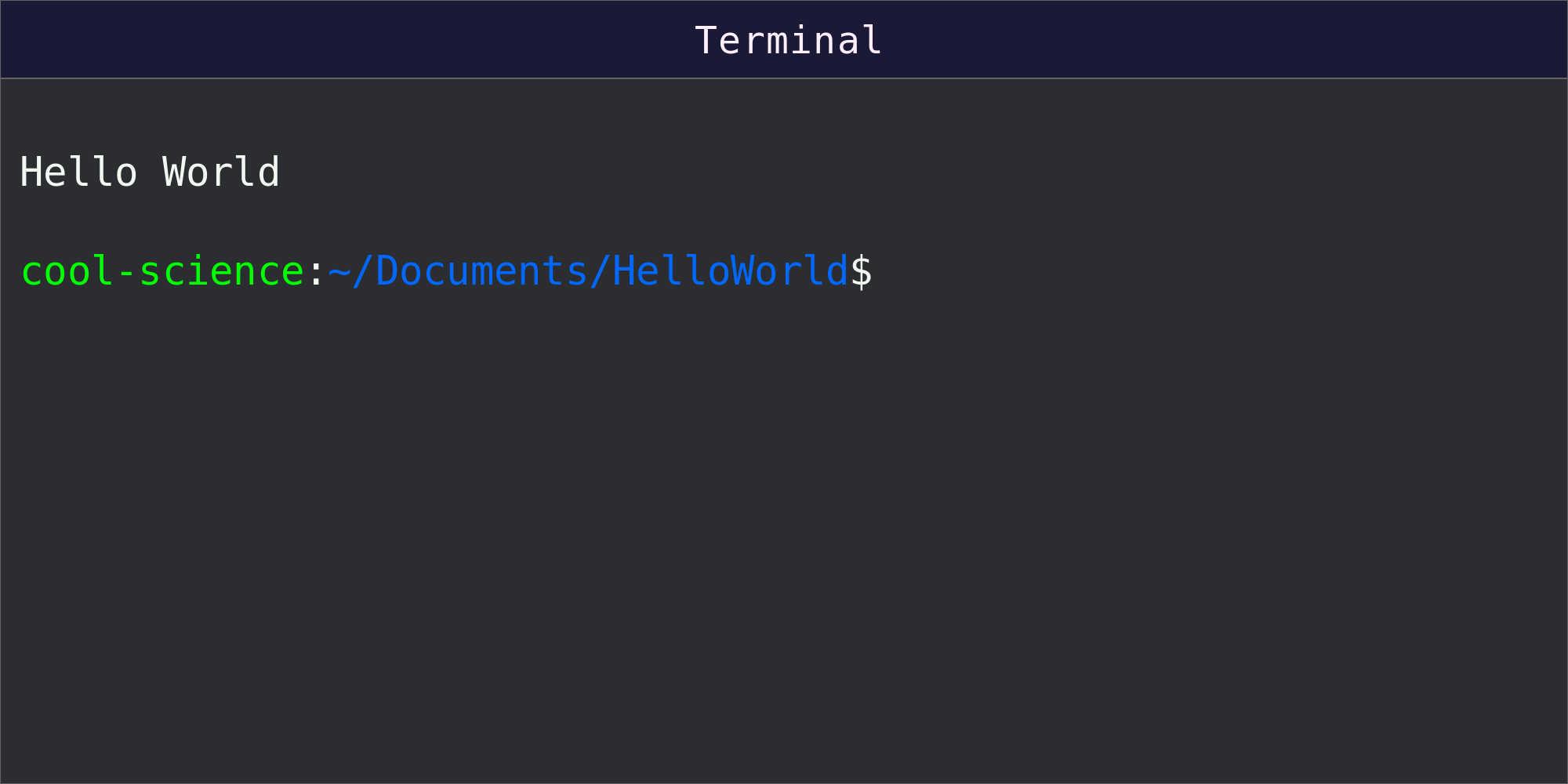 A quick look at Binary Executables

As you can see from the example above the C++ code is human readable but what about that binary executable? If opened in a text editor we’re faced with a lot of gobbledegook!

This is because the compiler has translated the source code initially into object code and ultimately into a binary file that links with the library or libraries referenced in the source code (remember the #include <iostream> line?). This binary file is a machine readable format, the instructions from our source code are now in machine code which can be understood by the CPU (Central Processing Unit, or more commonly just called processor). The intricacies of processor level programming are for a future blog, but suffice it to say here that a processor carries out instructions, how it does so is governed by the set of rules or ‘architecture’ that it has been designed with.

Binary files are structured in a particular way, the most common structure being ELF (Executable and Linkable Format) because it is designed to be cross-platform (can be used on many operating systems and hardware platforms).

We can use the terminal to find out with the command:
file test
the first few words of the results show:
test: ELF 64-bit
which means that our 'test' file is indeed an ELF file.

Now we can delve even deeper!

We can open the ELF file 'test' with the command:
readelf -a test
-a is the option to read and display all of the information in the file, there are other options to read sections separately.

OK, so the information displayed is still not necessarily more understandable but it is much more readable at least! Utilities such as readelf can be very useful for debugging purposes, that is checking, detecting and correcting errors (bugs) in a program.

We hope our brief introduction and demonstration of programming has been of interest and that you will be intrigued enough to try it for yourself and add your own cheery ‘Hello World’ !

There are countless websites offering help and advice on the numerous programming languages available; and many of them offer written and video tutorials.